For over 75 years, Rand-Whitney has been a leading innovator in the packaging industry.

We are an independent, privately-owned company with a unique, family values approach to the way we do business. As a member of the Kraft Group companies, Rand-Whitney prides itself on delivering only the highest levels of quality and service to all business partners.

Supporting our strength in the market is our ability to service an entire company’s packaging needs while providing individual support along the way. Starting with initial design to production quality samples, our goal is to provide our customers with a quality packaging product and topnotch customer service and support. 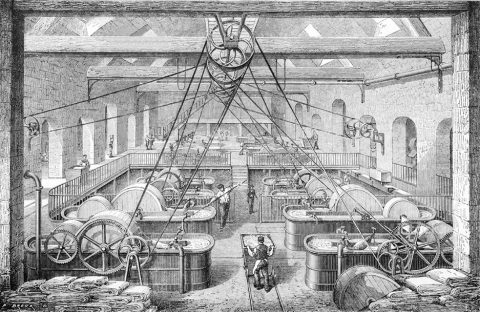 The Rand-Whitney Group traces its origin to 1857. In that year, Mrs. Elvira F. Dodge started a company making folding cartons in her home in Leominster, Mass. In 1938, Whitney Box of Worcester, Mass. acquired Dodge Paper Box, forming the modern company. The combined entity was named Rand-Whitney. From the beginning, the company has prided itself on family values. Rand-Whitney seeks to provide its employees with a good compensation package and work environment in return for quality work. The company strives to foster a family atmosphere, encouraging employees to bring family members into the company. As a result, several generations of families have been employed.

In the 1970s, Rand-Whitney perfected the technique of combining various coatings to improve the gloss, rub resistance and “cosmetic” feel of packages. They were recognized as the industry leader in the E and B flute business, which combines the graphic excellence of lithography with the strength and protection of corrugated. International Forest Product’s (IFP) start-up in 1972 assisted the expansion of Rand-Whitney’s sales effort from a regional focus to one of international scope. Today, Rand-Whitney and IFP ship to every major continent in the world.

Today, Rand-Whitney still operates based on their family values approach to business. Never sacrificing their goal of high-quality products and excellent customer service, Rand-Whitney is the packaging supplier of choice throughout the East Coast.

We understand that building sustainable packaging is as important to you as it is to us. That is why we offer 100% post-consumer waste paper.

Ready To Get Started?

Talk with a Rand-Whitney packaging expert and let us help solve your biggest (or even smallest) packaging challenges.